" I called Greg the day after the accident. He made the whole experience a lot less scary. He set my mind at ease time and time again."
Leah Thibault

When Leah Thibault purchased her Origin 8 bicycle frame from a local Portland bike shop in March 2012, she had no idea the bicycle she bought was defective.

Eight months later Leah was riding her bicycle to work in Portland, Oregon, when the front forks suddenly snapped and the front wheel separated from the bike. Leah was thrown over her handlebars face first into the street and sustained serious dental injuries.

She was referred to Portland lawyer Gregory Zeuthen by a friend. 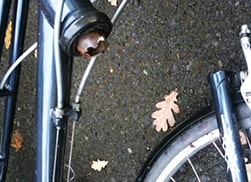 Zeuthen investigated the case and learned the Origin 8 bicycle was distributed by a Florida-based company and sold across the country. Zeuthen then hired an engineer to examine the bicycle and learned the bicycle forks were manufactured incorrectly. He discovered that an extra set of holes were drilled into the forks during the manufacturing process. As a result, the forks were susceptible to catastrophic failure from metal fatigue.

Zeuthen worked up the medical side of the case. He contacted her doctors and dentists and obtained an opinion regarding the need for future dental treatment.
Throughout the case, Zeuthen kept in contact with Leah and respond to all of her questions.

“I have never had a need for a lawyer before this accident. My friend had had a successful experience with Greg previously. I called him the day after the accident. He made the whole experience a lot less scary. He set my mind at ease time and time again. Without him, I would not have seen the same kinds of returns. I am grateful for the help he provided me with over the past few years.”

Shortly after Zeuthen filed suit in Circuit Court in December 2014, Leah’s personal injury case settled with enough money to pay for all of her future dental needs.

Scroll back to top