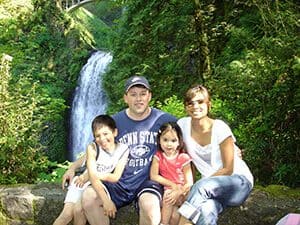 "I was impressed with their [Greg Zeuthen and Larry Baron's] knowledge of LASIK. They could have been doctors themselves," said Erland.

Chad Erland v. Brian Will, MD and Will Vision Center

Chad Erland was making a new start in life. He was in the process of finishing his senior level classes at Portland State University where he would eventually earn his BS in Graphic Design. While recovering from successful knee surgery, he thought it would also be a good time to undergo LASIK eye surgery.

He would rid himself of his glasses and contact lenses once and for all. His contacts irritated and dried out his eyes, pushing him to rely on his glasses. At a time when he would be embarking on a new career as a graphic artist, improved eyesight would be a plus.

He heard a commercial for an inviting LASIK clinic. He checked out the clinic on the Internet and was impressed with the firm’s web page. Everything looked sophisticated and professional. On January 16, 2002, he underwent LASIK surgery at the hands of the clinic’s ophthalmologist.

As Erland recovered from surgery, he noticed his eyesight was not improving as he had hoped. In fact, it was progressively becoming much worse. His eyesight eventually deteriorated to the point where he was almost blind in his right eye and had to squint to maintain vision in his left eye. He returned to the clinic. Here, the doctors told him to be patient, that he was trying to use his computer too much and that his eyes were “oxygen deprived.” Erland eventually visited the clinic a total of 16 times and underwent one more surgery on his right eye. His vision continued to decline and he increasingly felt the clinic doctors were withholding the truth.

At this point, a friend from school suggested he contact an attorney. A series of referrals led him to the team of Greg Zeuthen and Larry Baron. “I was impressed with their knowledge of LASIK. They could have been doctors themselves,” said Erland. Working with attorneys Zeuthen and Baron, Erland began to learn the facts of what had happened to him.

The optometrist who evaluated Erland prior to surgery told him he was “an excellent candidate” for LASIK. What no one told him was that he was exactly the wrong candidate for LASIK. The clinic had conducted pre-surgery topography scans of Erland’s eyes. When Zeuthen and Baron submitted these topographies to outside experts, it became readily apparent that Erland suffered from a disease called keratoconus. The disease had caused thinning of Erland’s corneas, a condition that was aggravated by the LASIK surgeries.

Through depositions and pretrial discovery of evidence, Zeuthen and Baron learned the clinic’s doctors failed to diagnose Erland’s keratoconus and failed to inform him of the potential danger of the surgery. “Those two were always on top of things,” Erland recalls. “I remember walking with them into one of the depositions, feeling very safe and secure knowing I had these two pros on my side. I was thinking, ‘I’m glad I’m not on the other end.’ They took good care of me.”

Settlement negotiated one month before the trial.

Because of the increasing evidence of negligence on the part of the clinic and its doctors, Zeuthen and Baron were able to negotiate an out-of-court settlement for Erland. The settlement was negotiated one month before the scheduled start of the trial.

Because of the damage caused by LASIK surgery, Erland has already undergone one cornea transplant to try to correct the damage to his eyes, with multiple transplants almost certain to come in the future. He will most likely never be able to pursue his chosen career as a graphic artist. He is working as a salesman for a carpet business.