Settlement for husband and father in auto vs. motorcycle crash

Settlement for husband and father in auto vs. motorcycle crash

Case results > Settlement for husband and father in auto vs. motorcycle crash 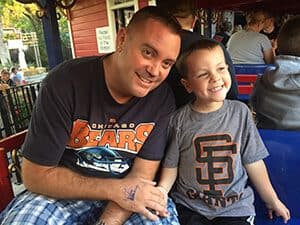 “I felt Greg was someone who understood what we were going through. Even though I knew he had other cases, I always felt like we were his top priority,”
Stephanie Sharp

“Greg was in it for us,” recalled Adam Sharp. “I feel Greg guided us in the right direction.” Sharp was injured in an auto versus motorcycle crash on Christmas Eve, 2012. He was on his way home from the supermarket, where he had gone to purchase prescription medicine for his son’s ear infection.

He rode his motorcycle because he knew the supermarket’s parking lot would be jammed with last minute shoppers. As he navigated a side street leading to the main highway, an impatient SUV driver, coming from the opposite direction, turned abruptly left to cross Sharp’s lane of traffic and smashed directly into Sharp. He landed in a nearby parking lot. He has no memory of the impact.

Sharp suffered a traumatic brain injury. He also had injuries to his shoulder and his hips. He had to take an early, disability retirement from his job with the railroad. Stephanie Sharp stopped working so she could stay home and take care of Adam and their two children, both less than 4-years-old.

A railroad attorney refers the Sharps to Greg Zeuthen.

“Greg did a good job presenting to us a variety of scenarios that applied to our case,” said Stephanie. “We all have a false idea of how the legal system might work. Greg fully explained what was happening.”

Because of Adam’s memory loss related to his brain injury, Stephanie handled much of the communication with Zeuthen. She admitted she might have been hard to deal with at times, “When it comes to things affecting Adam, I get emotional. Greg handled me very well. He didn’t take my outbursts to heart. He handled each situation with grace and stayed calm. He never took anything I said to heart.”

Zeuthen successfully settled the case. The resulting payment allowed the Sharps to pay off the debts they accrued from Adam’s injuries, and they were able to buy a home.
“I felt Greg was someone who understood what we were going through. Even though I knew he had other cases, I always felt like we were his top priority,” said Stephanie.